Time for a Billion Dollar Pill

The title song for my first album is "Billion Dollar Pill."  It was written during the Great Recession after the housing bubble popped.  I knew that it would only be a matter of time until it would all become true again.  We are in such a time right now.

With the stock market hitting new highs again, Bitcoin hitting new highs, and housing prices also soaring, tens of millions of Americans are waiting hours in lines to get a box of food, begging for unemployment benefits and eviction relief because they have lost their jobs.  COVID is blamed for many of these problems, as well as the lockdowns which were instituted to stop the spread of the coronavirus.

The government and the Federal Reserve injected trillions in stimulus into the economy to try and mitigate the suffering of so many Americans, who are mostly those at the bottom of the economic ladder.  After many months, the government is poised to unleash more stimulus including a $600 payment instead of the $1200 payment many people received from the CARES act.  President Trump is refusing to sign it, saying he wants $2000 payments to individuals.  Many of the people who have lost their jobs and are about to lose their unemployment are also facing eviction as the eviction moratorium will soon expire and they are months behind in paying their rent.

It's important to remember that the government and the Federal Reserve always find somebody or something to blame for their failures.  Wall Street was just bailed out for the fourth time in 33 years.  The crash in the first quarter of 2020 led to the fastest "recovery" in history which pushed the markets to new highs again. In 1987, 1991 (Dot-com crash), 2007 (housing crash) and now 2021 (COVID crash) bubbles created by the government and the Federal Reserve crashed leading to massive bailouts of banks and Wall Street.  All of this is evidence of a basic instability in our markets.  And since Fed bailouts are designed to inflate asset prices so that the banks don't all collapse, people who own assets like real estate and stocks have become very rich from the repeated bailouts while those who live paycheck to paycheck and don't own assets have become relatively poorer, literally living in a depression while rich asset holders enjoy their easy wealth.

We have lots of socialism in our country, it's just mostly benefits the rich. When they start to lose money, the Fed and the government have their back and they get taken care of, over and over again.

Please listen to my song and share it with your friends.  Here's some of the lyric.

Right now when times are tough

Not everyone has got it rough

When banks and politicians make all the rules

Those who ran the ship aground

Now have a tighter grip around

The handle of the rudder

On this ship of fools.

There are going to be a lot of turkeys at this Thanksgiving dinner.

"Victory Church in Tulsa posted on Facebook that it was hosting a "Friendsgiving" on November 22 and encouraged people to "come share a meal with us & BRING A NEIGHBOR.""

I uploaded my latest video to YouTube today.  It's not a music video.  It's a very short one-man play about Halloween, democracy, the election of 2020, partisanship, and groupthink.  Please watch it and pass it around.

Remdesivir: Does It Work or Not?

Six days ago the WHO said that the drug Remdesivir "has little or no effect" on surviving COVID-19.

Today, FDA in the USA approved the drug for treating COVID-19.

It certainly seemed to help President Trump get well quickly when he contracted the coronavirus.

Bette Davis has some very interesting things to say about the studio system in this interview on Johnny Carson.  She praises it for young actors as a way to learn the craft while getting a steady paycheck.

When it comes to dealing with COVID-19, we should all be more like Sweden.  They always kept their young kids in school and had limited lockdowns.  They had a large number of deaths in the beginning but now they have almost zero and are being told they don't need to wear masks anymore.

The US after a couple of months of lockdowns, shutting down the schools and forcing many businesses to close, has death rate that is still increasing.  Some states and local areas are postponing their plans to open up more of their economies.

While Sweden was criticized for having so many deaths in the beginning, they have always had a more long-term realistic approach to dealing with coronavirus. They pushed their deaths forward, the US and most other countries have pushed them into the future unless there is a vaccine suddenly available.

This chart tells you all you need to know.  They are months ahead of the US and many other countries as well. 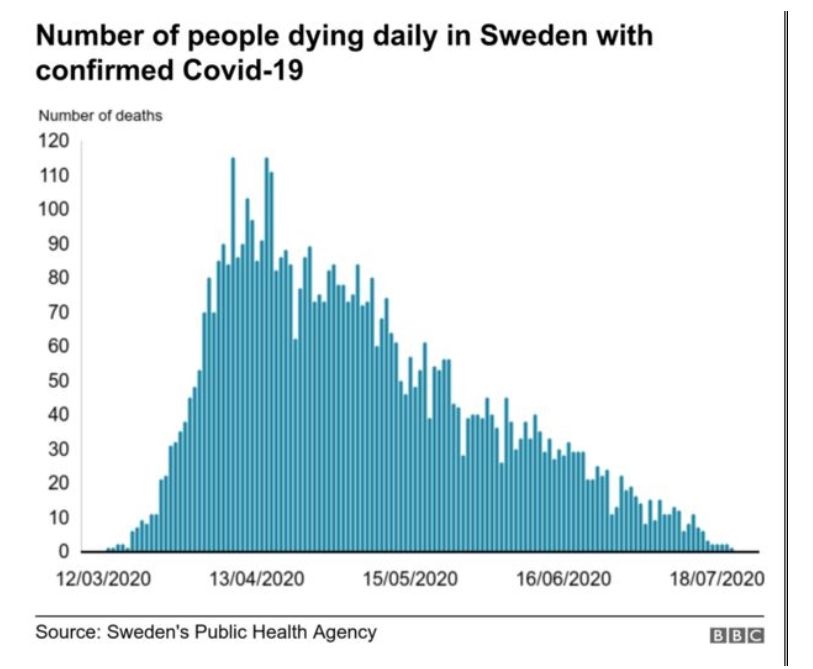 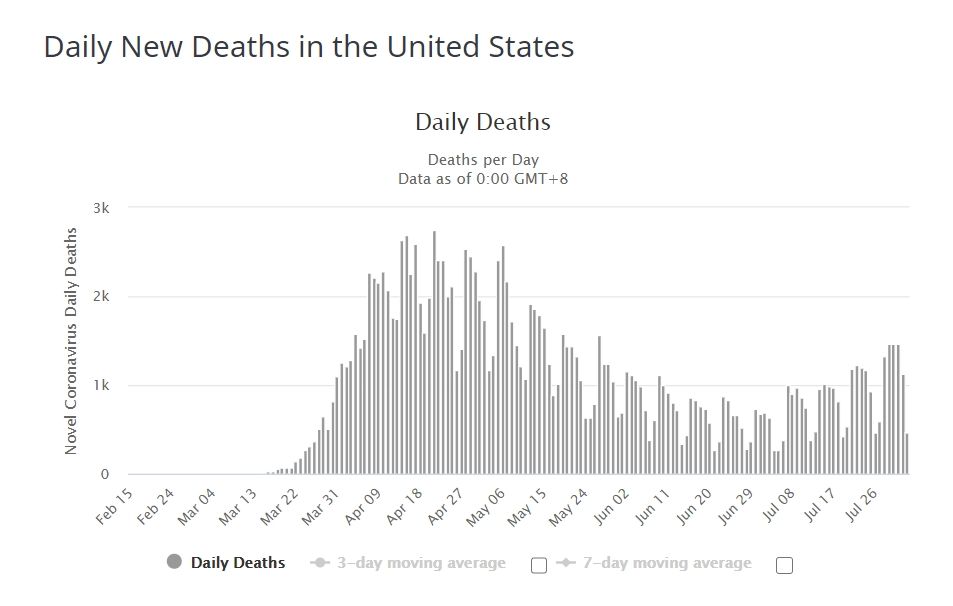 How to Build a Mid-Century Modern Sideboard from a Kit

I always have to be making something so another thing I like to do is make furniture.  I recently built a Mid-century Modern sideboard/buffet from a kit I bought on Overstock.com.

I did study furniture design and woodworking when I was in my 20's (a long time ago) and I've built some wonderful pieces from fine woods using traditional hand-cut joinery.  But with COVID-19 I don't have access to the community woodworking shop that belong to.  So I decided to build something from a kit, which while lacking the quality of a totally handcrafted piece, it is much less expensive, easier and less time consuming to build. I was pleased with how it turned out.

I also made videos of the process and posted them on my YouTube channel.

Here is the unboxing video:

Here is the construction video:

Lockdowns Prevented 60 Million COVID-19 Cases in the US

tA study released this week says that the lockdowns prevented 60 million people in the US from getting COVID-19.

Preventing hundreds of millions of people around the world from getting coronavirus, also prevented most of them from developing an immunity to it.  The lockdowns trashed the global economy, destroyed million of lives and businesses and have brought many poor people around the globe to the brink of starvation.

With all the non-stop media and government fear-mongering about the pandemic, it's easy to forget that the mortality rate from COVID-19 is very low, somewhere around 1%.  Many people have no symptoms and don't even know that they have it.  All they get from the infection is a natural immunity to it.

So if it comes back in future waves, what will they do then?  Lock everybody up again because there's no herd immunity in the population?

I believe a tremendous opportunity was lost here and at a huge cost to economies and people around the world, especially the poor who have no financial safety blanket to weather lockdowns, and often lack enough space for social distancing.

Until there is a vaccine, the best chance we have to fight COVID-19 is to develop herd immunity.  It's free and effective and the ability to get it has evolved over many millions of years.  We should not be completely stopping infections, we should be slowing them down so that those who get seriously ill can get the medical attention they need.  That can be done without totally destroying so many people's lives.

Today's Johns Hopkins map shows that almost 3.4 million people around the world have recovered from COVID-19.  We'd be in a much stronger position if that number was closer to 500 million. 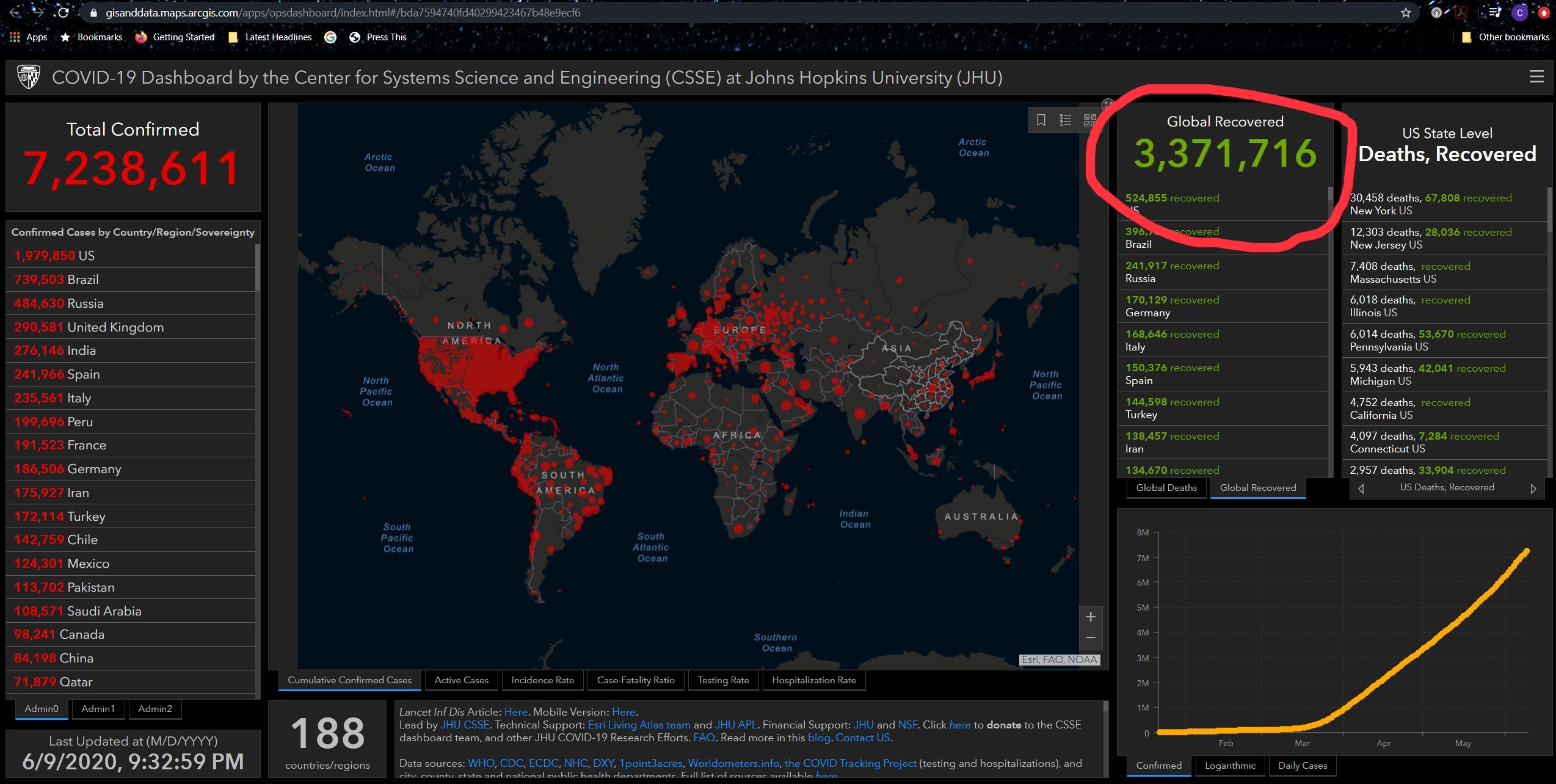 The media has done a great job of whipping up fear and hysteria around the coronavirus and the disease it causes, COVID-19.

The government is throwing billions of dollars into developing a vaccine and there is much discussion among drug companies and doctors about ways to vaccinate everyone on the planet.

An article in Smithsonian Magazine tells what happens when fear mongering greases the path for a hastily developed vaccine.  Swine flu was not as deadly as the vaccine they invented to prevent it.

This all happened in the spring, with emergency legislation for the “National Swine Flu Immunization Program,” being signed into effect in mid-April. By the time immunizations began on Oct. 1, though, the proposed epidemic had failed to emerge (although Legionnaires' Disease had, confusing matters further.)

“With President Ford’s reelection campaign looming on the horizon, the campaign increasingly appeared politically motivated,” Kreston writes. In the end, one journalist at The New York Times went so far as to call the whole thing a “fiasco.” Epidemiology takes time, politics is often about looking like you’re doing something and logistics between branches of government are extremely complicated. These factors all contributed to the pandemic that never was.

The real victims of this pandemic were likely the 450-odd people who came down with Guillain-Barre syndrome, a rare neurological disorder, after getting the 1976 flu shot. On its website, the CDC notes that people who got the vaccination did have an increased risk of “approximately one additional case of GBS for every 100,000 people who got the swine flu vaccine.”

Pandemic not as bad as originally predicted.  Election on the horizon. Rush to force vaccinations on as many people as possible.  Does this all sound a little familiar?

Pay attention.  I have the feeling we're about to see history repeat itself.

As of today, almost 2 million people worldwide have recovered from COVID-19 without a vaccine.  They have their natural immunity to thank for their recovery, a natural immunity that most other human being possess as well.

While this number is certainly smaller than the actual number, it's great to see that over 1.1 million people around the world have recovered from COVID-19 caused by the coronavirus currently sweeping the globe.

President Trump is currently predicting there will be a vaccine by the end of the year.  This prediction should be taken with a truckload of salt.  Just a few days ago Trump suggested that injecting household disinfectants could be an effective treatment for COVID-19.

The fact is that there is currently no vaccine and nobody knows when one will be available.  Over 30 years ago they were optimistically predicting we would soon have a vaccine against HIV, the virus the causes AIDS, but one has not been found.

Natural antibodies to the coronavirus are created when people have COVID-19 and so far there have not been any cases of people getting sick twice from the disease.  The people with the natural "herd" immunity are the solution to the pandemic, but currently polices which prevent the virus from spreading, are slowing down the creation of natural immunity in our population.  They also make it far more likely that we'll have a second wave of the pandemic in the fall, something that would not happen if we had a much larger number of people who have recovered from the disease.

Asymptomatic Coronavirus Carriers Are the Solution, Not the Problem

Natural Immunity to COVID-19 is a Human Right